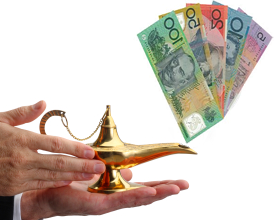 The interest rate futures market as of 08/08/11 is currently predicting six interest rate cuts. Yes, count them, six! And that includes two cuts next month (September). Does anyone else find this quite unbelievable considering the RBA rhetoric over the past year. We all know the inflation genie is out of the bottle, and the RBA's stated primary objective is to keep inflation under control, within their 2-3% target range.

Yes, The Reserve Bank promised to stamp down hard on inflation, and the recent CPI readings gave them ample reason to raise interest rates this month. But quite bizarrely, they chose to sit on their hands this month and do nothing about Australia's now well entrenched inflation problem.

Has the RBA abandoned their inflation target? I fear they have. Successive core inflation increases of 0.9% should have meant an August interest rate rise was a certainty. Inflation is on the march, not just in Australia but across the globe, and central banks everywhere are stubbornly refusing to act.

Of course there are serious financial issues across Europe and America. Everyone knew those global debt concerns were not resolved post GFC, and have still not been resolved today. The sovereign debt concerns are unresolvable, and can therefore be used as a permanent excuse by the RBA and other central banks to tolerate high inflation and avoid performing their duty of stamping down on inflation. This appears to be the position taken by other global central banks since the GFC, in many cases keeping rates close to zero while tolerating high inflation.

The Reserve Bank's failure to act in August has destroyed their credibility. After jawboning and promising rate cuts for months, they demonstrated a weakness and unwillingness to act, presumably due to pressure from business and government. Their bluff was called, and they backed down. Financial markets no longer place any faith in RBA promises, and are pricing in six rate cuts despite the RBA claiming to hold a tightening bias.

Not only do we have out of control inflation in Australia, we also have full employment, rising incomes, and house prices still at bubble levels. If the RBA can't raise rates now, how do they expect to be able to raise them later as inflation continues to rise while those other economic indicators weaken? Now is the time to act, before inflation becomes entrenched as an acceptable part of Australian life, as happened in the 80s. Failure to act now will lead to an even worse recession in the future. Kicking the can down the road just delays the inevitable and makes it worse.

Since that fateful RBA decision last week, the Australian dollar has tumbled and stock markets across the globe are reeling. Some commentators are saying GFC2 is here (although I would argue GFC1 never ended). If the RBA truly has abandoned their inflation target as I (and the financial markets) believe, then we could indeed see them slashing interest rates again as they did in 2008. This will most likely result in an expectation of much higher inflation, and a negative feedback loop of high prices across the board.

Instead of taking our medicine in 2008 (the recession we should have had), the government and RBA kicked the can down the road to 2011. Now the recession we need to have is much larger, but the RBA and government will probably try the same tactic once more, by dropping rates and stimulating the market one last time. The RBA is going for the easy option - inflating our way out of our debt problems, instead of taking the correct option, letting nature run its course, and accepting that a recession is necessary. Every boom must be followed by a bust. Every bubble must be followed by a crash. That's the natural order of things, and you can't kick the can down the road forever.

But they will try their best.

As the rest of the globe disleverages, the RBA and our inept government will attempt to steer Australia into one final debt fueled boom, a last hurrah for the Australian economy and housing market. Once the Australian population realises high inflation is the new RBA policy, they will decide en masse to trade their earnings for tangible assets (which for most Australians, means real estate). This final stage of the bubble is known as the Crack Up Boom. Yes, those real estate spruikers will be out on the streets once more, convincing working Australians to gear up into over-valued houses at the very peak of the greatest property bubble in history.

I'll leave you with the words of the great Marc Faber.

‘ I think we are all doomed. I think what will happen is that we are in the midst of a kind of a crack-up boom that is not sustainable, that eventually the economy will deteriorate, that there will be more money-printing, and then you have inflation, and a poor economy, an extreme form of stagflation, and, eventually, in that situation, countries go to war, and, as a whole, derivatives, the market, and everything will collapse, and like a computer when it crashes, you will have to reboot it.'

Are you looking for BMW Scanner for auto diagnostic your vehicle? AUTOSCANit is selling BMW ICOM A2 scanner at an affordable cost. It helps car owners to get real-time data of the working condition of car control modules.
Want to get Mercedes Scanner and Mercedes SD Connect C4 with one of the top quality at the best price through original made german company autoscanit.