On the Internet, nobody knows you're a dog, or a paid property spruiker. 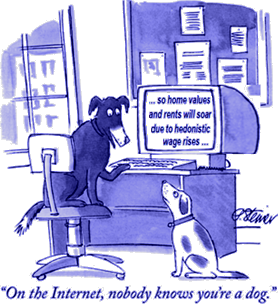 Who are you really chatting with, when you post on that property forum or blog? A regular person like yourself, or a paid spruiker, funded by the real estate industry?
That's the question that arose this week, when it was revealed on several major Australian property forums that groups of 'shills' or 'spruikers' may be bankrolled by big business and property groups to paint a false rosy picture of the local real estate market.
You see, dear reader, the property market is in severe difficulty. Stock on the market has gone through the roof while auction clearance rates have fallen through the floor. House prices are falling, rental vacancy rates are rising, incomes are falling (contrary to popular opinion), and Channel Nine's disastrous 'The Block' finale (watched by 3 million viewers) was the final nail in the coffin. The media is awash with articles about the oversupply of property, the dreadful consumer sentiment, and the imminent collapse of the great Australian housing bubble.

What is the property industry to do in the face of this new reality? Why, what else, but attempt to spin their own reality. Demographer Bernard Salt was recorded recently at the Congress 2011 event, conspiring with big business and the real estate propaganda machine to create groups who would plant positive spin messages on the opinion pages of major newspapers, discussion forums, blogs, twitter other social media platforms. Mr Salt advocates that these groups should seek out and counter 'extreme' views. His property industry colleagues at the Congress 2011 event recommended broad PR campaigns aimed at fighting 'negative' sentiment in the real estate market. Watch the video below.
Have they been successful in achieving their goal? Is there more to the bullish comments on blogs, forums and news articles than meets the eye. I believe there is.
It shouldn't surprise anyone to be told that the real estate industry might wish to sow fear, uncertainty and doubt among the general public. We've been hearing their fearful spruik for decades.

'Buy now or miss out forever! House prices always go up! Don't miss the boat! Rent money is dead money! Get on the property ladder! Now is a great time to buy! Double your money in 7 years!

Did you happen to notice recently, how in the comments section of any major property news article, among the majority of balanced and realistic posts, there's always one or two jokers insisting everything is fine and house prices are just about to skyrocket through the roof and into the stratosphere once again. How likely is it that real people could be so stupid, to expect another boom at the peak of the largest real estate bubble this planet has ever known?

Not very likely, is it? More than likely, these people are vested interest spruikers, paid to talk up the market. At least, that's the conclusion on popular real estate discussion forums TalkFinance, and Australian Property Forum.


TalkFinance: Has KPMG Set Up Paid Gangs of Cyber Spruikers?

In fact, a few smart investigators from the Australian Property Forum unearthed evidence that several high profile 'property bulls' are in fact 'sockpuppets' controlled by a single identity. It seems that after years of posting, and thousands of posts, the puppetmaster behind these characters slipped up on one occasion while posting on the Credit Crunch Forum.

It begs the question, how many of the prominent property bulls and investors posting on news articles, blogs and forums, are in fact invented characters, controlled by these property industry spruiking gangs? When pushed for the truth, the shill posting on the Credit Crunch forum was eventually forced to admit his use of specialised software for the creation of multiple 'sockpuppets'. This ties in quite nicely with a recent article I read on astroturfing.

Online astroturfing is more advanced and more automated than we’d imagined. Every month more evidence piles up, suggesting that online comment threads and forums are being hijacked by people who aren’t what they seem to be. The anonymity of the web gives companies and governments golden opportunities to run astroturf operations: fake grassroots campaigns, which create the impression that large numbers of people are demanding or opposing particular policies. This deception is most likely to occur where the interests of companies or governments come into conflict with the interests of the public.

The article is very enlightening. It seems there definitely exists specialised 'persona management software' that can be used to create all the online facilities a real person would possess: names, email accounts, web pages and social media. It generates what appear to be authentic profiles, making it impossible to discern between these virtual identities and real people. Is it so hard to believe that the property industry is using such software, creating scores of fake personas, complete with technically, culturally and geographically consistent backgrounds, history and supporting details, and randomly selecting IP addresses to hide their tracks? This behaviour does indeed make a mockery of online democracy. Could it be that blogs, forums, and the comments sections of major news articles are disrupted and manipulated by armies of organised 'trolls' and 'sockpuppets' controlled by well funded vested interest groups? And if they are, then what should we do to fight these underhand tactics? One option is to fight fire with fire, as suggested recently on the Bubblepedia forum.

Guys, the bears are starting to win the war on hearts & minds, but every day I see more bullish posts popping-up on forums all over the place. Our enemy is determined to keep the public fooled at any cost. I've got some notes here on tactics for posting on open forums, so check them out and add your own ideas. News and Fairfax are the biggest battlegrounds, with the likes of MVF and DB being very prolific (to compensate for the fact that their arguments are baloney). Please everyone get out there and keep the truth flowing so that these used car salesmen can't snare more innocents. Shepherd the sheeple to green pasture.

The Bubblepedia discussion thread sets out some excellent ideas, everything from posting subtle implications about the reality of the unhealthy property market, to questioning bullish articles, to posting personal anecdotes, and even to impersonating and ridiculing normally bullish commentators. But is this the right way to address the issues? Should we really stoop to the depraved levels exhibited by the real estate propaganda machine? Is there a better way?

Readers, I'd like to hear your views, but before I go, I'll leave you with one more example of the dishonesty displayed by the Australian property industry. I call this 'The Eternal FHB'. One couple, who are now featuring in their third (at least) mainstream media 'First' HomeBuyer informercial. Does this couple even exist? I doubt it. Even if they exist, can they really still claim to be FHBs a year after buying? In the bizarre world of the real estate propaganda machine, anything's possible!